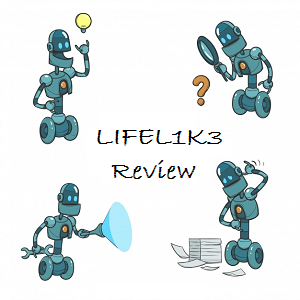 Your father gave me life. But you were the one who made me live.

🌟 It says on the cover of this book that it is a mix of Romeo and Juliet, Mad-max, X-Men and blade runner. That may sound cool but also too much? Jay is a creative author, we have already established that from the Illuminae files, so I was not so happy with this mixture, I wanted new things, the book starts with the rules of the robot community which sound pretty much like the rules in the movie I-robot and this also has some Robots (The animation movie) vibes! So this was just a collection of previous ideas into one book.

🌟 This is my first book by Jay alone, I heard mixed things about his other books and I was scared to try Nevernight because I saw many readers say that it is slow and that is always hard for me to get into. Surprise, surprise, This was not slow, the pacing was actually pretty good and more on the fast side, so many things were happening all the time. I didn’t feel bored at all.

🌟 Another thing that readers argue about is Jay’s writing style. It simply isn’t for everyone. I can relate to both parties. I am always in for a magical, poetic writing style which Jay fans agree on. But sometimes he just overdoes it and it becomes gibberish and illogical. Also I hate, hate, hate repetitions; Jay mentioned the Olive skin and the beautiful sharp pecs of the LIFEL1k3 many times (5 times), it may not sound too much for some readers but I can’t just ignore these things. I mean you can’t just repeat when you don’t know what to write and I partially blame the editors because it is their job to notice this kind of things!

“Of all the mistakes I made, I think you were my favorite,” she whispered.

🌟 The characters were good, I don’t have much to say about them tbh, usually YA MCs are annoying but I wasn’t annoyed by the characters here.

🌟 The Plot twists were predictable 90% of the time, the ending was good. The author profile says that he doesn’t believe in happy endings which made me oddly happy. How many authors can say that?!

🌟 In short, LIFEL1K3 was a fast-paced interesting mix of many robotic/ sci-fi things with good characters, twists and ending. The writing is somewhere in the middle. I can still recommend this series for sci-fi and fantasy fans!