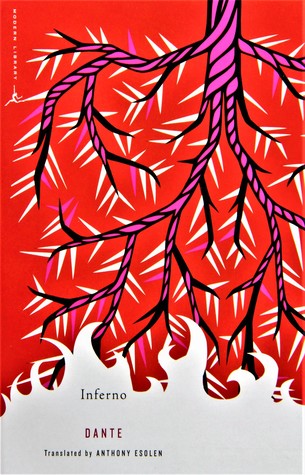 “But the stars that marked our starting fall away.
We must go deeper into greater pain,
for it is not permitted that we stay.”

🌟 Basically this book is about Dante’s journey in hell, so it must be one hell of a book, right?

🌟 I am not actually the biggest fan of modern poetry. I have tried books as The princess saves herself in this one and Milk and simply did not like them because they felt like a Facebook or a Tumblr post more than a book. Just put some words in certain topics in a column and that’s it.

🌟 I may have gone to the other extremity when I read a book written in 1300. And I was not disappointed. Dante is known as one of history’s greatest authors and you can see that in the writing style. I will take this opportunity to thanks the genius-being who is the translator. To be able to capture the essence, the rhyme and the messages in another language while maintaining the originality is no easy task. And he outdid himself in this one.

🌟  This is not a typical book, I mean there is no character development and plot twists because this is freaking hell! People are tortured here and not supposed to develop. Lol! A point that Dante clearly emphasized is that the punishment is equal to the sin. For example :
In the third circle, the gluttonous wallow in a vile, putrid slush produced by a ceaseless, foul, icy rain – “a great storm of putrefaction” – as punishment for subjecting their reason to a voracious appetite.

🌟 But one thing I am not sure about is how the author was censorious enough to pass judgement on many important figures. He decided that some people as Saladin and Prophet Mohamet were in hell and he even decided what circles to put them in. A slightly offending thing because it was clearly biased.

🌟Summary: A not so typical journey and a not so typical book. If you’re looking to read a slightly heavy book that affected literature (according to my friend who studies Eng lit) then this is what you are looking for. Final Rating is 4 stars.