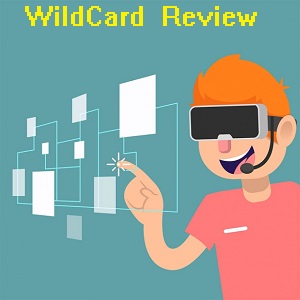 “Every problem has a solution. But after every solution, there’s a new problem to tackle, some new challenge to take on.”

🌟 If you know me well, then by this point you should already know 2 things: I love Marie Lu, I have read all her 9 books and I own 7 of them. And you also should know that I separate authors from their works, meaning that I won’t like a certain book just because it is by a certain author.
🌟 This book has been divided people into either loving or hating it. I fall somewhere in the middle as I can see why either party will do so.
🌟 I think the main problem with this is that I didn’t feel that it was a continuation of Warcross. And while Warcross had a few tiny problems for me, I still liked it! The world-exploration there and the tournament and the characters all added up to the story. But in Wildcard, I didn’t feel this spark and connection. I think there was more focus on the plot which was agonizingly predictable. I said in my review of Warcross that Lu style is predictable for me but is still enjoyable. Take out those things that made me pleasant and we’re left with an expected story set in a dull world and flat characters.
🌟 Speaking of characters, Emika was a prodigy in book 1 and she was good at many things. In this book, I sensed that she was “normal” and like a different character from what we originally knew. She lost the sassiness and smartness and became un-likeable. I said that Marie should try to write “non-prodigal” characters but I think that is what she does best.
🌟 I liked the moral questions that this book throws around: What do you think of using humans for experiments? Obviously everyone would say they are against it but did you know that much of the medical revolution we have today is due to experimenting on humans post WW2 specially.
What about making something that can control human behavior toward “ideality”, decreasing crimes and wars and negativity?
I really like to think about those types of questions and this provoked this kind of thinking, that’s why it was still a good book.(That could have been better).
🌟 Summary: I think that this book should be approached differently than book 1 and with lower expectations, it had less world building, less interesting characters and a slower pace but it also provided good ethical and moral questions. It may be enjoyable for some and won’t definitely be by others. I am however still reading Lu’s future releases as she is def a great author! I ended up giving it 3 out of 5 stars!

🌟 Prescription: For fans of virtual ethical questions and those who liked Warcross but are willing to go with low expectations!

"Let's start with the end of the world, why don't we? Get it over with and move on to more interesting things". 🌍 I am excited for this book so much and it is going to be the first book we read in The Book Clinic (AKA my new book club). 🌍 I am going into this one after posting this picture and fingers crossed it does not disappoint me. #QOTD: Have you ever been in a book club?
“I’ve never needed a sword to protect you—to raise you the way your father wanted. Caring for my family meant putting away the fighter, so I did.” ⁦🗡️ Out of the 156 books I read this year, this one was my favorite and I still recall some of the scenes vividly! 🗡️ The writing, characters, plot and everything was just perfect! I hope to re-read this one next year, probably with my book club! QOTD: What is your favorite book of 2019?
“Change is simultaneously a fast and a slow process. The great forces of history are slow-moving and unnoticed by those surrounded by them, visible only in hindsight where they appear inevitable.” 🕯️ I loved the world building in this series and if I enjoyed the writing a bit more then I would have been recommending it to everyone! I still think it is worth giving a chance because it was not a bad book. #QOTD: Which book has a very unique world building in your opinion?
“A beautiful thing was much harder to destroy than an ugly thing.” ⁦. The author sent me a copy of this book and I am glad she did. I really enjoyed this book about nightmares and Faes and other Fallen creatures. . I recommend this for fans of ACOTAR and you can check my blog for the full review of this book! #QOTD: What is your favorite mythical creature?
“You didn’t get to be the villain of one story, she supposed, unless you were the hero of another.” ⚘ I am posting my full review soon on my blog. I liked this book but enjoyed book 1 more. I love the fact that they both work as a standalone though. ⚘ I think the author has great characters, writing and humor. His works show experience rather than being a new author. I will read whatever comes next in the series. #QOTD: What fantasy books made you laugh?
“I could recognize him by touch alone, by smell; I would know him blind, by the way his breaths came and his feet struck the earth. I would know him in death, at the end of the world.” 🍁 This was one of the few books I gave 5 stars to this year! I love mythology and Miller is an artist when it comes to that. I loved almost everything about this book. 🍁 I read Circe before this one but I actually enjoyed this one more. I am looking forward to her other books although I think her next book is a tempest retelling. #QOTD: Which author's debut do you like more than their other books?