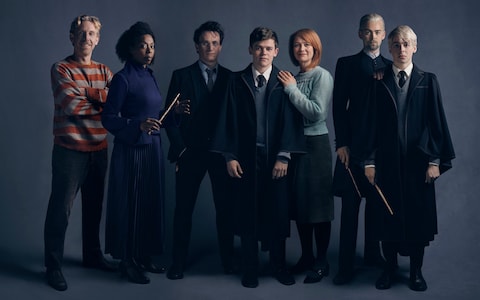 “Those we love never truly leave us, Harry. There are things that death cannot touch.”

This Review contains spoilers, precede at your own responsibility!

🌟 I had enough of these books that are being marketed wrongly, If you are marketing this as the 8 book in the series, I am going to review and rate it as such!

🌟 My biggest problem with this script is that it was trying to fix some plot holes/ problems in the previous books leading only to worse problems. Examples:
.
* “The scar had not pained Harry for 19 years. All was well.” That is how book 7 ended and that sentence may have made millions cry. Now, they simply tell us that it had hurt him at some point. Sounds like a cheap trick to intrigue us.
.
* If there was a time turner that could go in time as the one in this script, maybe we should have seen a Harry Potter and the Time Turner book because I think its significance is larger than explained here. Wouldn’t you think that Lord Voldemort would have used it to change everything that has happened?!
.
* Harry as a 38 or 39 year old guy still holding a grudge and acting childish with Dumbledore who he has forgiven decades ago. It is like he went back to Order of The Phoenix mode!!
.
* Draco being a Jerk again!!!!
.
* It is a known fact that Voldemort has a child but it only took us 8 books to hear of that fact!
.
🌟 I am not gonna focus much on the character development which was non-existent, and Hermione and Ron didn’t play an important role. The time jumps made it hard to connect to the characters. But since it is a play script, I am going to be nice and ignore that.
.
🌟 The writing was no way near Rowling’s style, this script depended on our previous knowledge of literally everything and was trying hard to mimic Rowling’s style. There were quite a few funny moments to be fair!
.
🌟 Summary: This is a play script and it is supposed to be read as such without focusing on the details. There were many things that I couldn’t simply ignore and were just unbelievable. This didn’t add much to the story and you can stop at book 7 if you like it!
I ended up giving it 2 out of 5 stars.
I can’t judge the play as I haven’t seen it yet, maybe someday I will, but till that day I am disappointed.
.

If you want this book you can get it from here: