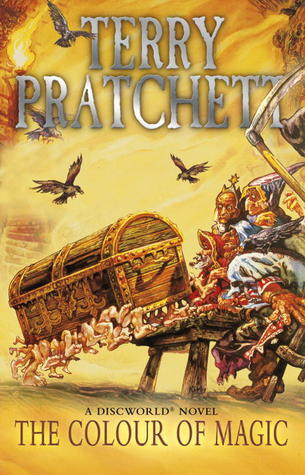 🌟 I was excited to read this book and to discover Practhett’s writing, I had read Good Omens, or attempted to read it but ended up DNFing it. I wanted to see the highly acclaimed Discworld and if it was any better!

🌟 It was better, but not like much better. But at least I could finish the book and that’s something! I think the mix between humor and fantasy is weird but it can work and it kind of worked here! I heard that this is the worst in the series so it looks like it does have potential!

🌟 The writing made me giggle a few times, I don’t laugh easily so I am not the best judge if this was funny, I think some parts were funny and sometimes I saw attempts but I had a straight face and did not even smile at those attempts so it really is like an acquired taste!

“Every intelligent being, whether it breathes or not, coughs nervously at some time in its life.”

🌟 There was also a weird thing about the writing in that it tends to make things sound weird while it could have been said easier with a better impact! I confess that some things went over my head and took me some time to understand, like the four-eyed creature that is actually a human wearing glasses but even the name given to him was not a typical human name! I was confused at more than one point and going through the reviews now, I discovered that I was not the only one!

🌟 The book felt choppy and chaotic and all over the place and I think it could have been edited times better than the current version. It was a debut and really felt like one.

🌟 The world is unique because it is like a Disc (Hence the name Discworld) on the top of 4 elephants and those are on a turtle (Sex unknown and this is an important part of the story lol) as the picture above shows!

🌟 Summary: I was not impressed by this book but it was not bad that I had to DNF it either! I do not know what made it blow up in the past and to continue the series into 40 books, maybe because it was unique and unlike any other thing I read. The book was a bit confusing, a bit funny and a bit chaotic. The good news is I heard it gets better which means, for the time being, I am willing to continue to book 2 at least! If you are looking for an excellent book that mixes humor and fantasy then I recommend King of the Wyld by Nicholas Eames.