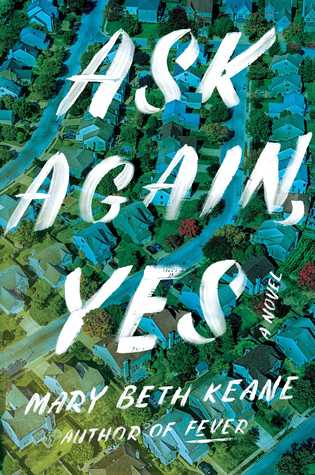 “The thing is, Peter, grown-ups don’t know what they’re doing any better than kids do. That’s the truth.”

I love a good family drama story, I enjoyed Little Fires Everywhere and Little Fires Everywhere and I was looking for the next family drama on the same level and I had hopes for this one. Reviewing this books is hard for me, objectively it was mostly good. Subjectively, it was a heavy book (Way more than the 269g it weighs) and I can’t say that I enjoyed reading it as I expected to but I think it is not meant to be entertaining. (I am conflicted because I believe all books can be entertaining whatever the content or message they have).

The book is about two families, The Gleesons and the Stanhopes. The story follows a long time line through different points and we are first introduced to the families as the fathers are both Police officers and are colleagues and then we are introduced into their children and then things start to develop slowly until we have a major event changing the course of the families lives including the course of the story.

I don’t usually include trigger warnings in my reviews because I honestly suck at noticing these things and I am hardly affected by book contents but I feel I should mention that this book was a heavy one with topics like: Guns, Shooting, Psychological disease, death, affairs, addiction and I am pretty sure I missed other things. The story initially is all over the place and we get many details that are not very important to the story but then slowly it starts getting clearer and more organized. The time jumps in my own humble opinions did not always work well in this book because they were abrupt and sometimes when we had some happy moments, a time jump would happen to the next tragical event.

“and try it and try it a little longer and next thing it’s who you are.”

The writing is good, I felt it was fitting for the kind of story it is trying to tell. There was some purplish writing but within the acceptable limits, I can even say it was good and there was the normal writing that shows rather than tell us the story.

I go for Family dramas whenever I want to connect strongly to the characters. I feel the success of such stories depend on the characters very much and that’s why I loved the books I first mentioned at the start of this review. The characters in this book were very well written, showing and leaving space for the reader to draw their own feelings was something I appreciated. I felt something was missing but I can’t decide what exactly hence my thought that this is objectively very good, subjectively less so. All the characters go through a lot in the book and we get to experience the book from all their perspectives. Each character had a good and a bad side and that’s what made them even more realistic. Anne is one of the most broken characters I have ever read and she really creeped me out, as someone in the medical field I couldn’t have a clear diagnosis for her, she swayed between Paranoid schizophrenia to depression and mood swing disorders and to my surprise that was later mentioned in the book.

As depressing as I may make it sound, the book ends somewhat on a positive note and I like what the author did. Although most of the events are molded by the event happening early in the characters lives, they get a closure later in their lives and in the story. The beginnings can shape our whole lives as the author describe it in this quote:

“She’d learned that the beginning of one’s life mattered the most, that life was top-heavy that way.”

Summary: I think my actual rating is somewhere closer to 3.75 stars but I still believe 3 stars is a low rating to put on GR. The story is a heavy one discussing many hard topics and that’s why it is important to know that before reading it. Objectively, it had a shaky start but it continues more smoothly. Still an important read in my opinion!