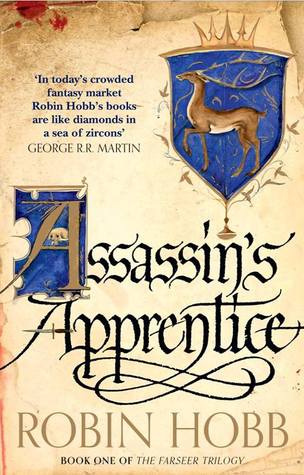 “Nothing takes the heart out of a man more than the expectation of failure.”

I always wanted to read this series just because Hobb has one of the most humble GR bio and whenever I see it, I just think she is cool, I wanna read her books and the second reason is because adult fantasy is mostly written by men and a such a successful female author is not very common.

I also like to consider the setting the book was written in, this book was written in 1995, that’s 25 effing years ago and it still is relevant to this day which is crazy! The author husband’s job and her hobbies include fishing, gardening, mushrooming and other stuff related to nature and it really shows in her writing. I guess what they say about writing what you know best is true after all!

The book follows the story of Fitz Farseer, he is the bastard son of Prince Chivalry, the story starts with his earliest memory as a six years old almost returned to the royal family, Chivalry who is the king-in-waiting decides to abdicate this post. Fitz gets blamed and then King Shrewd takes him under his wing and decides to teach and train him, that way he becomes one of the king’s men and he is trained under the king’s assassin as his apprentice.

The book has both the extreme ratings of 1 and 5 stars, people tend to hate or love it, So how did I feel about this book?

It reminded me of observing snails as a kid, it is interesting to see these creatures walk slowly leaving a shiny trail behind them and then you would get fed up with the whole thing and you just want to spice things up and wish the snail could be faster (Not to spice it with salt though). These were more or less my feelings on this book. The book is very very sloooooow! One of the slowest most descriptive books I ever read. The writing is not bad which made me enjoy the beginning and I kept enjoying it until I got frustrated by not much happening specially past 50% of the book till the last 50 pages or so when the pace picks up again and things happen again.

The writing is good, I mean I once read that classics and older books were very descriptive and slow because people didn’t have access to internet like nowadays so authors had to describe everything. The problem is that things got much faster today and people prefer faster things and that explains why people gave this 1 star and couldn’t tolerate the writing. If you are a fan of slow reads then I don’t think you will have a problem with this. I should not that I specially liked the world’s folklore and history at the beginning of each chapter.

Fitz is a wholesome character, I think he has many upcoming books to grow in this series or the next books featuring him. I like what Hobb did when she named the characters as characteristics, I finally understood why! The characters didn’t stimulate much feelings from me but they weren’t bad. My favorite was The Fool because he was so odd and unique.

“Learning is never wrong. Even learning how to kill isn’t wrong. Or right. It’s just a thing to learn, a thing I can teach you. That’s all.”

The world-building is not very extensive, we get much descriptions but we don’t explore much of the world, the magic felt very basic and simple, it is just communicating with animals or between humans using a mental link. I wish we saw more of that to be honest.

Summary: To be fair to the book, I understand both people who enjoyed it and those who did not, it takes great patience to got\ through one book and it is such a huge journey. The writing is good but overly-descriptive, the pace is very slow, the magic system is not complex but there is something wholesome about Fitz and the story that made me finish it. I think older me would have never been able to finish this. I will probably finish the trilogy and then decide what to do with the rest of the series!

“Friendships take minutes to make, moments to break, years to repair.”
“The legacy you inherit is nothing compared to the legacy you leave behind.”
"The measure of a man is what he does when he has power"
“Love is a beautiful thing. Is it not, Inspector?”
"We always think there's enough time to do things with other people. Time to say things to them. And then something happens and then we stand there holding on to words like 'if'."
“That’s the power of words; twenty six little letter can paint a whole universe”
“Sometimes the only answer is blood and steel”
“Gradually the waiting began to feel less like waiting and more like this was simply what life was: the distracting tasks undertaken while the thing you are waiting for continues not to happen.”
“There’s no freedom quite like the freedom of being constantly underestimated.”