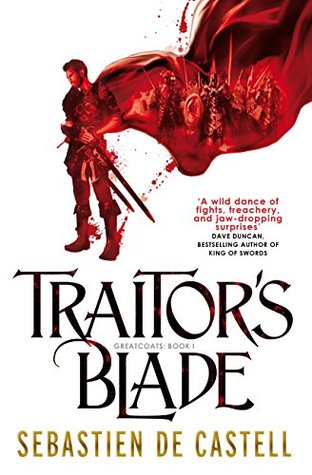 “The archer is the true weapon; the bow is just a long piece of wood.”

I have read the whole Spellslinger series because I heard good things about the author and I was not impressed upon finishing it. I finished the first book in the Greatcoats series and I am already impressed!

We follow the story of three of the Greatcoats, basically heroes of the king and are in charge of upholding his law. At least they were because the king has been impaled by the duke and the greatcoats reputation has been tarnished and now they are scattered across the land and take whatever jobs that they can get to go on with their lives.

The three Greatcoats we follow are Falcio, Kest, & Brasti. I noticed that De Castell has a talent for writing characters that make you care for them quickly. I mean less than 50 pages in and I already was a big fan of the Greatocoats and I wanted to know more about them. I actually think that the characters are the best element in the story so far! Here are some of my thoughts on those characters:

💉 Falcio: The first leader (Cantor) of the Greatcoats. He is a really good person, nice and well rounded. He is so passionate about the Greatcoats and thus fits the role as his leader. During the story, we are introduced to his sad past regarding his King and family.

💉 Kest: A swordsman, probably the greatest one alive. We also get a glimpse at his past and his family. He is kind of serious and wants to get down to business.

💉 Brasti: A master archer, handsome and has a dirty mind. He kind of was the comic relief character but also had some more serious moments which kind of balanced his character. He is my favorite so far!

I loved the characters by themselves and also loved their interactions. I was kind of disappointed when the story followed Falcio for the majority of the book but I know it is just book 1 and I know we will be getting more about the other Greatcoats.

“That’s what being free means – not the right to do whatever you want, but the right to take a stand and say what you’ll die for.”

The writing is very accessible to all readers, the author uses simple language which makes it a fairly easy read and a good place to start for those new to the genre. There is some cursing and filthy humor so I still think of it as an adult book anyway.

I am kind of surprised by the plot in a good way because it was fast paced and less than 400 pages in length but much happens in those pages. There were twists and stuff that I did not expect which is cool but on the other hand there were some threads that were not well explained and in my opinion they were major and kind of faded into the dark and left me confused as a reader. There is a cringy scene that I won’t talk much about and everyone who read the book knows what I am talking about.

The world-building is not extensive, there is a lot that we still don’t know about but it actually did not bother me because I felt we got enough for book one in the series and I am pretty sure there is more from where that came from.

Summary: The Traitor’s Blade is a strong beginning to the Greatcoats series. The characterization bleeds of the pages, the writing is simple and the pacing is fast which makes it an addicting read. There were a few things that were convenient to just move the plot and I wish they were done better but all in all, it is still a very solid entry to the series and I am looking forward to the next book in the series.