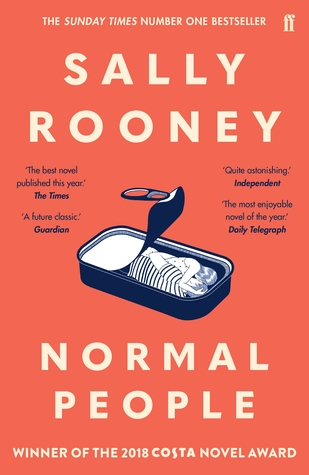 “Life offers up these moments of joy despite everything,”

Normal People is one of those books that made a huge success and has more than half a million ratings on GR. I just can’t help it when it comes to those books and I want to understand why are they very successful. With this one, I failed to see this reason!

Maybe the TV show helped getting the attention of more readers but I think it was developed because readers found it interesting to start with (It is like a cycle). When I finished this one I went immediately to GR to check the ratings and reviews and it kind of made me feel less weird because among the top reviews, there were plenty of negative ones that I related to. I understand that it is a polarizing story and that readers will either love or hate it (me belonging to the latter group unfortunately) but still I can’t understand the hype it got.

I recently read that everything boils down to marketing these days, the shows we watch, the books we read, the food we eat and I am saying this because I think this book had such great marketing that contributed to its huge success.

“Most people go through their whole lives, without ever really feeling that close with anyone.”

For me, it was just a love story of two young adults, Marianne and Connell, I think there are elements thrown to make it look like a deep story but they made it pretentious. I recently read Conversations with Friends by the same author and there were a lot of common things between the stories: people falling in love with the wrong people, people smoking for no good reason, the absence of quotation marks which at this point I believe Rooney don’t know the rules of so she said fuck it and got rid of them all together (I tried to find a deeper meaning to this but really couldn’t since it is a thing in her two books and mostly in her upcoming book), people discussing my region’s politics to sound politically correct, using mails when clearly there are more advanced ways of communication. Also Marxism because the author is a communist.

There are a few things here like an abusive family which I found two dimensional and read YA books with a better representation of this. There are time jumps with each chapter which made the flow clumsy in my opinion.

“Marianne had the sense that her real life was happening somewhere very far away, happening without her, and she didn’t know if she would ever find out where it was or become part of it.”

I think I will stop the review here just because there are a lot of people who did not enjoy the book too and wrote more eloquent reviews. I saw reviews criticizing the writing, the editing, the characters and I almost agree with them all. I think it is just not a book for me.

Summary: Unfortunately, I did not understand the hype with this one. I think the story is very simple and has been done before in a better way, the characters are not relatable and the editing is less than average. It is a polarizing book and you will need to try it to see whether it is for you or not!