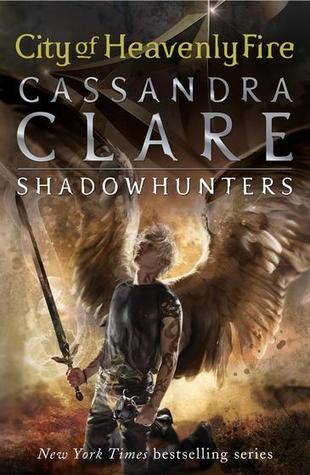 “There are memories that time does not erase… Forever does not make loss forgettable, only bearable.”

My Journey with TMI has finally came to an end and I am happy it did so spectacularly! Here’s a funny thing, the first Cassandra Clare book I bought was The Dark Artifices book one and I wanted to read it because of the hype but I learned that it does not work like that and it is better to read the books in order. I thought there were a million books and I wasn’t very encouraged but I decided to do it slowly and here we are at last!

I thought the first TMI trilogy was okay, TID was much better and then the first two books in TMI second trilogy disappointed me and I was so eager to finish it but book 6 was the best in the whole series!

The writing keeps improving and I really like that, these are many years that Cassie spent writing and getting experience and you can tell that from the books. Most of the things that bothered me in the last books were fixed here. I liked the prose, it is very easy to read and I find it much more quotable than the last entries! I also found it funnier than the last books and appreciated some of the humor at last!

“Every time I think I’m missing a piece of me, you give it back.”

Now what made this book so good for me was the character! For once in my life, I did not think that Jace and Clary were the most annoying characters on earth! Simon and Isabelle were very cute, Malec made much more sense after this one. I will link Melanie’s Review because I so agree with her thoughts and ratings of the series! In fact, she was the main reason I decided to read this series! I just am annoyed by some of the deaths in this book because they felt underwhelming and did not have much impact on me, in fact I had that “Is this it?” moment and thought the characters did not really die when they did! I also think Cassie hears what the fans think and want which led her to do some abrupt changes to the characters which did not feel natural at all!

The world-building is great, I think it is one of the best stories with all this mix of different creatures and I liked their interactions and rules! Vampires, Werewolves, Faes, Demons, Angels are all part of the story and I love that!

The pacing is much more better than in the previous books, it was faster and the book wasn’t boring although it was the longest in the series! I loved how all the trilogies come together, characters from TID and TMI and TDA are all in this book which I did not see coming and it actually got me much more excited for the next series! Now something that I thought was brilliant is the planning Cassie does, I could see that her series being published in 2020 was already foreshadowed in 2014! And this finale closed all the threads from before, If it was planned it is great because it takes a smart person to do all of that and if it is not then I think it is even greater for making sense of everything without previous planning!

Summary: I had a rough ride specially with the second trilogy in TMI world but I think the finale made up for it, It is like everything I complained about previously was fixed, the writing improved, the characters got better, the pacing is better and the plot was excellent! I thought I would be bored of the world at this point but to be honest I am even more excited for what to come next!