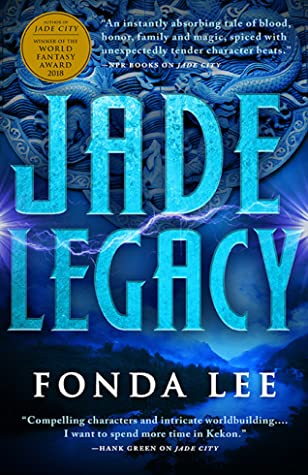 “The way to defeat a chess master was not with greater genius, but by forcing her to play a different game.”

Jade Legacy wraps up The Green Bone Saga trilogy and it does it in a very beautiful way! This is Lee’s best work up to this point and it has been years in the making! The book currently has slightly more than 3000 ratings on GR with an average rating of 4.74 stars! Almost 80% of the readers gave it 5 stars which is just crazy!

The prose is slick, poignant and hauntingly effective in stirring all kind of emotions. The book is a thick one because the story takes place over a long period of time with many time jumps. The time jumps can take some time to get used to but they do have a purpose and I think it is the appropriate way to tell the series unless it was planned to be a 10 books series. For me the story was kind of episodic in nature, it did not have the usual flow of a book with an introduction and building up tension toward a major event then an ending. It did have that but in multiple parts which kind of made me think of it as a TV series and I think it can be easily turned into one.

I am not a big fan of stories about crimes and I was never able to watch The Godfather which this story is kind of inspired from. However, there is something very interesting about this story and I did care immensely about the clan and the characters. In fact, I think the characters are what makes this series shine and succeed! There are multiple story arcs told through this book and they all are gripping. Hilo has one of the best character growth of all the books I read. Anden is one of my favorite characters and even Ayt Mada who is kind of the villain here is super interesting and you can’t help but root for her sometimes!!!

“The clan is my blood,” she whispered, her voice thick with emotion, but perfectly steady. “And the Pillar is its master.”

Although the plot is intriguing as mentioned before, there were some parts that were less interesting than the others. I was expecting a very epic fight like the one in book two which I can still clearly remember after 2 years of reading it! To be honest, there is action and there is a lot of it but I was just waiting for something grand and it did not come. I also have some mixed feelings about the ending which I can’t say much about because this is a spoiler free review. It does make sense in a way but I think this book did a lot of unexpected things that took me by surprise and I respect that!

Summary: I feel like I can say way more about this book but I don’t think I can do it justice. In short, this was not your typical fantasy read, Lee did some unusual things and they do pay off! The writing is great, the characters and their growth are some of the best in the genre! The world building and story are very intriguing. There were a few things that I did not like which knocks half a star for me but I think if you haven’t read this one yet, what are you waiting for?

“How do we do it?” Hilo sighed deeply. “You of all people already know the answer to that, Shae. We don’t handle this world. We make it handle us.”